All Brands  ›  Cigars  ›  Handmade Cigars  ›  Casa Blanca Cigars  ›  Casa Blanca Reserve  ›  Toro
CBRET
4.0 1
Toro Most bundled cigars are hit or miss for me. But I&#x27;ve been a fan of the original Casa Blanca line for years, going back to when they still came in boxes; so had to try the Reserve. The wrapper does give it a nice boost flavor wise, but it by no means overpowers the original Casa blend; it might touch the medium strength scale, might. The bundle I purchased burned straight, held a nice white ash. The original is in my &quot;morning cigar rotation&quot;, but the Reserve will be a nice addition to that. Will definitely order more. Wish they had a longer size; they&#x27;d make a very good &quot;morning golf cigar&quot;! 4 4 1 September 20, 2019 Mark B. 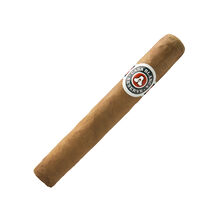 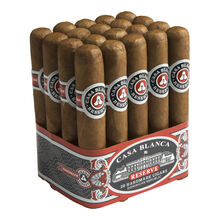 Fans of fuller flavored Cuban-style smokes can now enjoy that great Casa Blanca taste with the exciting new Casa Blanca Reserve Toro cigars. The Reserve Toro still uses the same Mexican binder and aged long fillers from the Dominican Republic, this time with a more robust Ecuadorian leaf replacing the Connecticut wrapper found on the original blend. This bolder medium-bodied Casa Blanca is brimming with flavors of cocoa, cedar, roasted nuts, and hints of spicy and peppery zest not found on its mellower cousin. Just as smooth and satisfying as ever, Casa Blanca Reserve Toro cigars are available right here in affordable 20-count bundles.