All Brands  ›  Cigar Accessories  ›  Cigar Cutters  ›  Xikar Cigar Cutters  ›  VX2 V-Cut Bronze
3XVX2BZ
3.0 1
VX2 V-Cut Bronze After reading several reviews about the Xikar V-Cut and the Colibri V-Cut, I decided to purchase the Xikar. According to the reviews they cut the same. So my decision came down to the lifetime warranty. Looking back I should have gone with the Colibri V-Cut. The Xikar cuts at a shallow angel every time... as if it is lifting the cigar during the cut. It is not a sharp, deep, crisp cut like the Colibri. Two years later the lounge Colibri V-Cut still cuts sharp, deep, and crisp. Very disappointed in the Xikar. 3 3 1 April 17, 2020 Brian E. 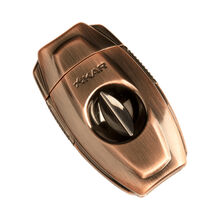 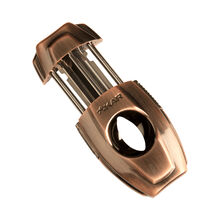 The premium Xikar VX2 V-Cut Bronze cigar cutter offers a deeper V-Cut than other v-cutters on the market by using a reverse v-cut blade that cuts from the outside in, which helps reduce the possibility of cracking the head of the cigar. Easy to use, just press the two side buttons to release the blade, set the cutter on a flat surface, then place your cigar on the middle of the cutter and press it closed for a precise cut every time thanks to XIKAR's very sharp surgical stainless-steel blade.