The History of Padron Cigars

The History of Padron Cigars

Long seen as the king of Nicaraguan cigars, Padrón Cigars has risen very quickly through the ranks of the premium cigar industry over its relatively short history. While many of the top manufacturers, such as Montecristo, Romeo y Julieta, and Partagas, have been producing cigars for decades, the Padrón cigar brand did not begin to widely appear in the United States until the 1970s.

Yet, the family’s tobacco history stretches far before then, dating well into the 19th century. It was then, in Cuba, that the story of Padrón first began.

Decades prior to Jose Orlando Padrón founding Padrón Cigars, his grandfather, Damaso Padrón, began the family tradition of growing tobacco. Damaso Padrón first came to Cuba in the mid-1800s, hailing from the Spanish Canary Islands. Damaso and his family purchased a small farm in the Pinar del Rio region, the world’s most lucrative tobacco area, setting the stage for Jose Orlando to learn and grow.

The family began growing and curing tobacco and kept purchasing smaller farms in the area, slowly growing their stock. Eventually, they purchased a factory in Piloto, which is where the official name of the Padrón company, Piloto Cigars, comes from. One of Padrón’s most recent and popular releases, Padrón Damaso, bears Damaso’s name to honor his legacy.

After some years of slow and steady growth, in 1926, Damaso’s grandson, Jose Orlando Padrón, was born. It was Jose Orlando who would take this small Cuban farming family and transform it into the tobacco dynasty it is today.

Jose spent his youth working in the fields and learning every aspect of the industry. As his knowledge and experience grew, Jose soon faced an almost insurmountable obstacle. Following the Cuban revolution, all of the island nation’s industries became nationalized.

With the Padrón family’s farms and factories hoisted under the control of Castro’s regime, and fearing political retribution, in 1961 Jose Orlando decided to leave his homeland and began his trek around the world. After some brief time in Spain and New York, Jose brought all his knowledge and experience to Miami.

With barely any money in his name, Jose Orlando arrived in Miami in 1962, and through hard work and determination, set up the building blocks for one of the world’s greatest cigar companies. It was in Miami, with a little help from a friend, that Jose was given the chance to work, save his money, and begin developing his own company.

Struggling to get by as a gardener and landscaper, Jose Orlando’s friend gave him a small hammer so that he could begin working as a carpenter. It was with this hammer that Jose was able to work and put money aside. After saving close to $600, Jose was finally able to purchase enough tobacco and employ a roller to begin producing cigars once again.

Fans of Padrón Cigars may recognize the hammer; its symbol is depicted on every box of Padrón Cigars. The hammer represents the tenacity, hard work, and persistence of Jose Orlando to find success for his company.

In 1964, Jose Orlando had officially kicked off his cigar company. Jose rolled his cigars in the traditional Cuban fashion, using only top-quality Connecticut Broadleaf tobaccos. They became immensely popular in the local area, and the Padrón name began to gain momentum and recognition throughout Miami. The founding of Padrón is celebrated by the brand today with Padrón 1964 Anniversary Series.

However, with his rising popularity, Jose began to realize the limitations of using strictly Connecticut tobacco. This tobacco took an unusually long time to cure, leaving Jose with a delay between rolling batches. Yet, hope came in the form of a man from Nicaragua.

This tobacco farmer had heard of Jose’s expertise and asked Jose to accompany him to Nicaragua to inspect the quality of his tobacco. They traveled together to the Jalapa region, and it was here that Jose had a revelation. This was the tobacco he needed to use to make the top-shelf cigars he had always dreamed of.

Jose began using Nicaraguan tobacco in the late 1960s but soon found his supply was still unable to keep up with demand. So, in 1970 he again packed his belongings and moved to the cigar capital of the region, Esteli. It was here where the Padrón brand that we all love today came into being. 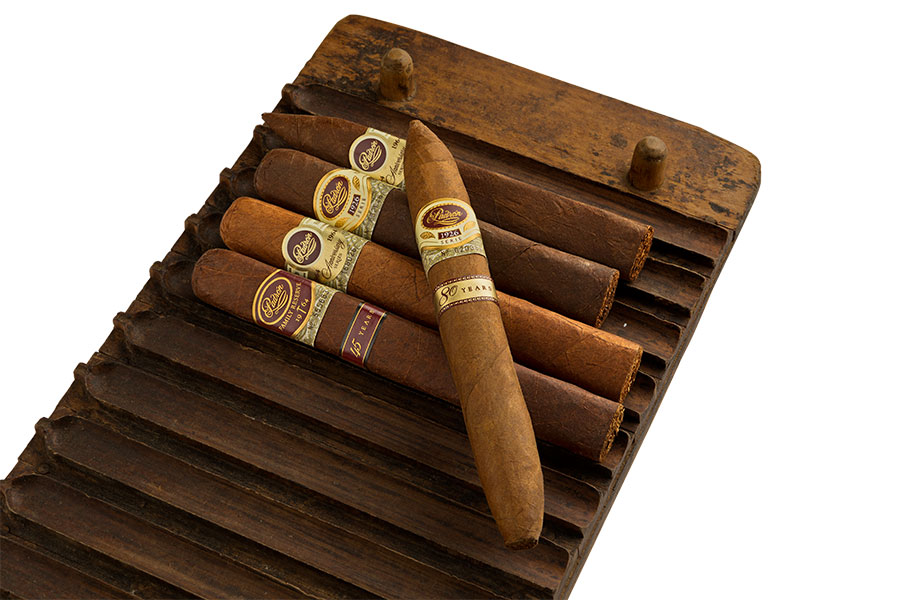 One might think that the company saw smooth sailing from here. Unfortunately, this was not the case. Soon, Jose began having to deal with familiar political problems. Nicaragua was in a position of severe political unrest at this time, which was all too familiar for Jose, who experienced similar conflicts that gripped his home of Cuba less than 20 years prior.

Jose tried desperately to stay out of the troubles, but it was not to be. His factory was burned down during the political riots. It was rebuilt, but just in case, Jose also built a separate factory over the border in Honduras. There was much uncertainty as to whether the brand could continue in such an unstable political climate.

The Sandinista Rebellion had been a success, and they were now in control of the Nicaraguan government. In order to ensure the safety of his company, employees, and factory, Jose spoke to a high-ranking Sandinista official. The official then promised Jose there would be no more interference with his business, and he could begin rolling cigars once more. Even still, the path towards success was not clear.

The Sandinistas are a left-wing socialist organization. At the time, the United States, which was and still is the main market for Padrón cigars, was notoriously anti-socialist. As they had done with Cuba, the United States began a trade embargo with Nicaragua in 1985. Jose once again had to appeal to a government entity to ensure the continued existence of his beloved Padrón Cigars.

Due to the popularity of his product and his nonpolitical stance, Jose was granted permission to continue to export to the US for an extra six months, just enough time for him to get most of his inventory out of Nicaragua and ramp up Honduran production. The tides would turn again in 1989 when President Bush lifted the embargo and Padrón cigars began to pour in from Nicaragua.

Since then, the Padrón company has flourished and become the industry titan it is today. Jose, and now his son Jorge, run the business together out of the company headquarters in Miami. In 2003, a new facility was built in Esteli, Nicaragua, with twice the space as the original.

It was a long and hard journey for this company. While looking back, one may ask if it was all worth it. Then you sit back and light up a

Now that you have a deeper understanding of the history of Padrón Cigars and how these major industry player got their laurels, I want to take you on a little tour through their catalog. Padrón’s super-premium portfolio consists of six lines, each with a significant meaning behind them, so let’s take a closer look at all of them.

The Padrón Series is the most affordable line from Padrón cigars with a rich medium to full-bodied taste. The line consists of sun-grown Habano that has been aged for at least two and a half years and offered in every size you could imagine. Each Padrón Series cigar in this line is available in a golden brown Natural or dark, oily Maduro wrapper. The Padrón Series offers exceptional quality and value.

Handmade with 5-year aged Cuban-seed tobacco, Padrón 1926 Series are full-bodied cigars that combine complexity, balance, and flavor. Each Padrón 1926 cigar has a band embossed with a serial number so you can verify that it is the real thing.

When smoking one of these beauties, expect ultra-smooth notes of chocolate, espresso, caramel, and cocoa. These gems commemorate the year that brand founder José Orlando Padrón was born, 1926. Every cigar is box-pressed with annual production limited to 100,000 cigars to ensure you get the best.

This box-pressed line is packed with flavorful coffee, chocolate, and sweet spice nuances while remaining meticulously balanced the whole way through. The Padrón 1964 Series serves not only as a celebration of the family’s 30 years in the business and the company’s 1964 founding, but also a celebration of cigar making at its finest.

The Padrón 1964 Anniversary is without a doubt, one of the best tasting full-bodied cigars you will ever smoke. Just look at the glowing reviews: Exclusivo (Maduro) was rated 94 and placed fifth on Cigar Aficionado‘s “25 Best Cigars of 2011,” and Diplomatico (Natural) earned a score of 93 from Cigar Aficionado in 2019. Padron 1964 Series is a perennial all-star that any aficionado needs in their humidor.

Touted as one of the finest ever made, Padrón Family Reserve took the cigar world by storm in 2009. It quickly became famous by winning the prestigious Cigar of the Year award from Cigar Aficionado. An honor they went on to win three more times, an accomplishment few other companies have ever achieved.

Padrón Family Reserve is available in five different sizes, with each size representing a different year to celebrate significant moments in the Padrón family lineage of luxury blends. The Nicaraguan tobaccos used for the blend are extensively aged for over 10 years. Although full-bodied, these box-pressed gems are incredibly smooth and well balanced with lush notes of coffee, cocoa, cedar, toast, and caramel.

Named after the man who started the Padrón family’s tobacco traditions, Padrón Damaso strays away from typical Padrón blending and flavor profiles. Unlike most Padrón offerings that use exclusively Nicaraguan tobaccos, Damaso features a stunning golden-blonde Ecuadorian Connecticut wrapper.

The result is a blend unlike anything other in the Padrón catalog, exuding a silky-smooth mellow to medium-bodied profile with delicate, refined flavors of cocoa, sweet spice, creamy caramel, cedar, and hints of pepper. This is a great Padrón offering if you often find rich, bold, flavors overwhelming.

With Padrón Special Releases, you can find all of the limited-edition and special blends that have come from Padrón, including their several Anniversary releases.

Wrapped in a super-dark Maduro Habano leaf, Padrón Special Releases 40th Anniversary consists of four figurado-shaped beauties featuring the finest Nicaraguan tobaccos that have been aged for five years. The result is a full-bodied smoke that is incredibly smooth and well balanced with sweet notes of coffee, toast, and a warm caramel-like finish.

There is also the iconic 50th Anniversary Limited Edition, made to celebrate 50 years of Padrón’s success. Crafted with Nicaraguan tobaccos that have been aged for over ten years, these jewels are brimming with well-balanced, rich, and complex, full-bodied flavors, often regarded as the best Padrón release to date. To protect you from the many fakes, each band is embossed with its own serial number.

José Padrón still has his hammer, and it’s become part of the company’s logo as a reminder of how he started life over and built something very special to support his family. Since 1964, the company has developed its reputation by sticking to its tradition of producing the best possible handmade cigars with the same Cuban-born recipe, and the same tried and true techniques used for generations.

People love Padrón Cigars not just because they make some of the best cigars on the market, but also for the dedication, craftsmanship, passion, and tenacity of Jose Orlando Padrón to provide such top-shelf products year after year.