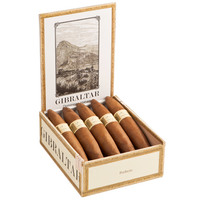 Robert Caldwell may not seem like your typical old-school cigar manufacturer. He is over six feet tall with blond hair and what is, may I say, a unique and awesome fashion sense. Seeing him on the street, you may view him as an artist or a musician. Yet in reality, Robert is a tobacco maestro. His mind is a vault of tobacco knowledge and he has used it to become one of the top blenders in the industry. He utilizes the traditional methods to make his cigars so that they are reliable, well constructed, and flavorful. However, when it comes to presentation, Robert stands alone. He knows that he makes fantastic smokes, but when you are a new player in a game full of legends, you need to stand out.

Robert’s artistic mind is what makes Caldwell Cigars even more special. From his traditional portraits on the Eastern Standard line to the more surreal look of The King is Dead, and yes, even the innocent and colorful Yellow Cake, Robert’s work draws people to his cigars before they even light up. The best part is that, after getting that first taste, people realize it is more than just presentation; it’s an excellent, well-crafted, and artistic cigar.

When first developing his cigars, Caldwell took all aspects into account. He decided on Dominican tobacco because the Dominican Republic began cultivating tobacco well before Cuba. He drew on the history and the experience of Dominican rollers to create his phenomenal new-age line.

Caldwell’s newest line, Blind Man’s Bluff is his first rolled in Honduras (at the famed Camacho factory). Although its Habano wrapper and Honduran Criollo tobaccos make it taste quite different than his usual Dominican brands, you can taste the same quality and craftsmanship throughout—that’s how you know it’s a Caldwell. So, next time you see Robert at an event or walking through out the streets of Miami, stop for a moment because you’ll be looking at a new legend.