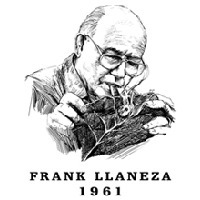 Highly regarded as one of the most famous cigar makers in our lifetime, Frank Llaneza began working in the cigar industry at the age of 15. One of the first cigar manufacturers to set up shop in Honduras following the Cuban embargo, Frank played an instrumental role in getting Cuban seeds to Central America after the Cuban Revolution, and helped shape the non-Cuban cigar industry into what it is today.  For many years, Frank was President of Villazon & Co, and  produced some of the most well-known brands in the world, including Punch, El Rey del Mundo, JR Ultimate, and Hoyo de Monterrey just to name a few. For his hard work, milestone accomplishments, and dedication to the industry, Cigar Aficionado magazine inducted Mr.Llaneza into its Cigar Hall of fame in 1997, which had only six members at the time.

Thanks to his wonderful working relationship with JR, I was fortunate enough to meet Frank on many occasions when he would visit our office. He was a very humble man who almost seemed embarrassed when I complimented him on his wonderful smokes. Instead, he would simply shake my hand, and give me a specially aged beauty from his own private collection. The freebie was never my intention for the much-deserved compliment, but he always insisted that I take it.

Legendary in quality construction and flavor, I have always loved smoking every famous brand that Frank created – and I still do, but one in particular, the Frank Llaneza 1961, really stands out as one of the best cigars that I ever tasted regardless of the manufacturer.

I would never have the opportunity to compliment Frank on his very last work-of-art. Sadly, Frank passed away at age 90, shortly after its release, and would not get see the success of the very cigar named after him.

Featuring a hearty looking, smooth and firm, Ecuadorian Criollo 98’ wrapper and the finest blend of Nicaraguan and Dominican filler tobaccos, this final piece of the Llaneza legacy embodies everything one would expect from a premium cigar … and more. 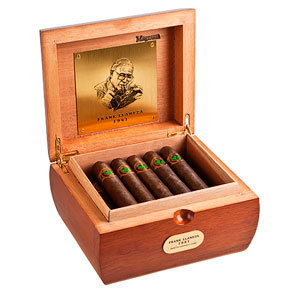 I’ll never forget the first time I lit up the Frank Llaneza 1961  Double Magnum (6 1/2 x 54); I was immediately in stogy heaven! A few million puffs later, I still feel the same elation when I pluck one out of my trusty humidor. Every size in the line offers the same mouthwatering goodness.

Upon lighting, , the 1961 opens  up with a  blast  of dark pepper and cedar that quickly gives  way to deep rich notes of zesty spice, dark chocolate, cocoa and cinnamon. At the midway point, a symphony of complex flavors that include leather, warm bread, nutmeg and coffee join the mix.

The final third of the cigar remained full-flavored, but was much creamier with pronounced notes of caramel, sweet spice and espresso.

Although highly regarded by serious cigar enthusiasts, it never quite achieved the fame it deserved. More high profile brands, with fancier packaging and high cost advertising has made the Frank Llaneza 1961 a forgotten (and now very affordable) treasure that you simply must experience.