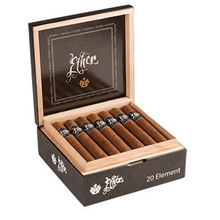 The word has come to mean that pleasantly smelling anesthetic or also a solvent.  But ether is much more.  Its meanings are like the clear air in the sky beyond the upper reaches of clouds.  Astronauts flew into the ether before reaching space.  But way back when, ether (spelled aether) was considered a very rarified and elastic substance that was believed to permeate all space.  Ok so what does this have to do with cigars?   Well this summer at the trade show, Jochy Blanco came out with a cigar called Black Abyss.  It has been very popular and it has been hard keeping it in stock, especially at the price.  Now Jochy has come up with another one, this time with Rafael Nodal from Boutique Blends.  The duo have been making the highly rated Boutique Blends aged limited editions, like Aging Room Havao, Aging Room M 20,  M 21 and M-356, Aging Room Maduro, Aging Room Quattro F66 and their newest, strongest cigar the Aging Room Bin No. 1.  With that legacy, Nodal and Blanco developed Ether, a full-bodied Dominican Puro.  The blend uses very old and aged Dominican Habano fillers with a terrific Dominican wrapper.  If you like the Black Abyss, then Ether should really light your fire.  Ether comes in 4 sizes, the Element at 6” x 52, the M.E. at 5.75” x 46, Flux is 5” x 54 and the Big Bang is a 6” x 60. The prices are great as well, running between $4 to $5.

Speaking of Jose Blanco—aka Jochy—he has been busy not only making Ether, Black Abyss and the Aging Room blends, but he is also working with his cousin, the OTHER Jose Blanco.  Jose, not Jochy, is the one who worked for years at La Aurora as sales manager and worked on the blends for the company.  Jose was always proud of his Barrel Aged blends because the factory took tobaccos and aged them in rum barrels.  The barrels did not add sweetness, but just a bit more complexity to the aged tobaccos.  After retiring form La Aurora, Jose went to Joya de Nicaragua for two years.  Now he is back with his own company Las Cumbres and the debut cigar Señorial.  Jose, who is older than I am, marked his 65th birthday last week.  While many companies have marked their anniversaries—Ernesto Perez-Carrillo’s 5th anniversary EPC, Quesada with their 40th anniversary among others—Blanco is marking the birthday with a special cigar: the Señorial 65th Anniversary for his birthday.  The cigar is 100% Dominican with a Piloto Cubano wrapper from La Canela and the binder Dominican Corojo from La Canela; fillers are Dominican Piloto, Corojo Viso and Corojo Seco.  The cigar comes in one size, a perfecto measuring  5.75” x 55. The price is $14 each but because Jose and Jochy are aging it the cigars won’t hit for a while…well after Jose’s birthday.