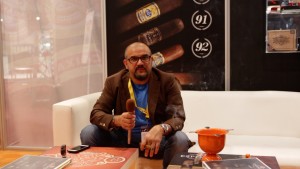 Its no lie that Erik and I are friends, however he deserves this award. There was no back alley deals here.  Coming into the show with the Reggae and the collaboration with AJ on Murcielago, Erik demonstrated that even with the FDA, he will not be stopped from creating new amazing blends.  It was a close call seeing as how Nestor Plasencia came in strong with the Alma Fuerte, but the fact that Erik made fun of my shoes, I feel that getting this award is fitting. 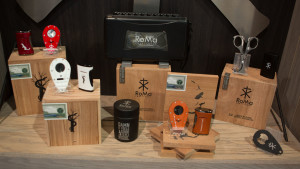 If you do not know Roma Craft, then this award makes literally no sense.  Actually, I know the company quite well but even I’m confused.  Anyway, as many of you know I am a huge supporter of Mike and Skip and the amazing work they are doing with Nica Sueno.  Although they had nothing new for American consumers in terms of cigars, they have released some new sizes into the European market and have worked with Xikar to create some top of the line Weasel related products that you must pick up right away. Pop goes the Weasel! 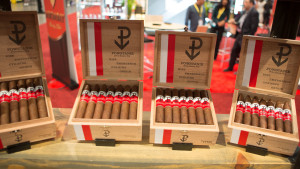 Ill admit El Gueguense had my vote in the beginning, but after learning the correct pronunciation most people catch on pretty quick.  However, for Mike and the boys over at Pospeich Cigars, it has probably been a battle to get the right pronunciation.  At the end of the day you can call this line sd;ofihsdjghsdkfjg and Id still love it.  I got to enjoy my favorite broadleaf in the new robusto size at this year’s show so props to the cigar hustler for bridging the cultural differences between America and Poland by using a delicious cigar. 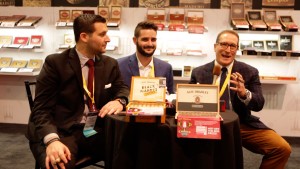 I have interviewed many of the biggest and most interesting people in the cigar industry, but I must say never have I been more touched then when I sat down with Alec Bradley front man Alan Rubin and his boys, the names sakes of the company, Alec and Bradley.  The relationship between father and sons surpasses the norm when it comes to working in a family business, and Alan could not have been prouder that his boys followed him to work for this great company.  Let’s all just be happy he didn’t have another child named Eugene or something.

Best Booth With No Cigars in it- Room 101 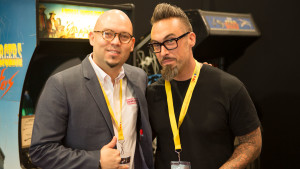 Yes Boofy is back!  Matt Booth has risen from the depths of hell and is reeking havoc on the industry yet again.  While the big cigar news is mostly focused on his two collaborations with Robert Caldwell and AJ Fernandez, I think the real story is the Room 101 booth this year.  It had no cigars, 1 couch, and 3 vintage arcade style video games.  In the midst of playing Asteroid, Matt presented me with a custom urinal screen with his face on it.  I have used it Matt, many many times. 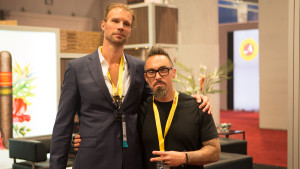 The picture says it all.  This team up between two legends really looks like it should be on a VHS cover and picked up at your local Hollywood Video.  While the Hit and Run was the talk of the show and one of the best new cigars of the year, I honestly can’t get over how adorable these two look together.  It’s like a version of the movie Twins but in some kind of weird Miami nightmare scenario. 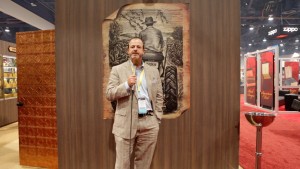 The South has risen again, this time from two debonair gentleman who are bringing some much needed southern charm into the cigar industry.  First we have Robert Holt, whose work with Southern Draw has made him a household name.  If you try the new Jacobs Ladder, make sure you are sitting down, it does pack a punch.  Next you have my friend Steve Bailey of Cornelius and Anthony.  I have never seen a company rise so far so fast, all due to Steve’s dedication to quality and humility.  These are two guys I wouldn’t mind sitting on the porch sharing a mint julep with.  Well, maybe not sharing, we could each probably have our own. We are all adults. You get the idea.

Best Statue Based on a Mythological Figure (or is it?) Steve Saka 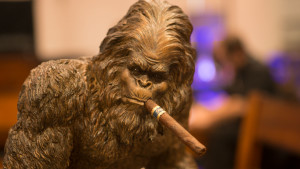 Since the creation of Dunbarton Tobacco and Trust, I’ve been waiting to find a cigar from Steve Saka that I didn’t like.  Better yet, I was trying to find one that’s average, and to no avail.  Following major releases like Sobremesa and Mi Querida, Steve came in hot this year with the Todos Las Dias, one of the most well balanced full body cigars I’ve had in aa while.  Yet, I kept getting distracted at his booth when I thought I saw something rustling past me.  It was probably just the wind, but just to be sure I’m going to call the guys from Supernatural to have a look.

Best Accessory Based Off a Coen Brothers Movie- Xikar/Hutch 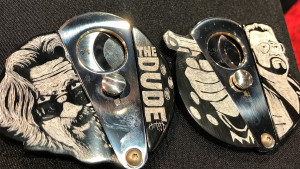 These two cutters are all I care about in life.  The reasons being are 3 fold.  First, it is a Xikar cutter so you know it is of the highest quality and will last a lifetime.  B, Hutch studios hand crafted the designs on them.  Have you ever seen such quality work by hand!?  Lastly, this is one of my favorite movies of all time and it should be yours man.  At the bottom of the page I will leave my bosses email address and I encourage you all to email her asking her to buy me this cutter.  The dude abides. 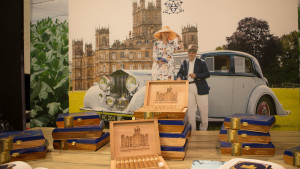 There was so much drama on PBS’s Downton Abbey that you could taste it.  But it probably tasted weird.  However, the Highclere Castle cigar from Nick Melillo tastes outstanding.  Nick worked hand in hand with the Earl of Carnarvon to make a premium cigar in a similar style to what the ancestors of the Earl would smoke.  They even found receipts dating back 200 years to see what kind of cigars the aristocrats would enjoy.  The results speak for themselves. This cigar has even higher ratings then the show! Let’s just be glad he didn’t make a cigar based upon an American drama, like Greys Anatomy or something else that’s stupid. 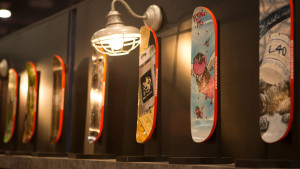 Look at these skateboards… that is all.