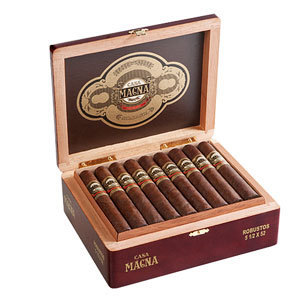 The Quesadas are also busy with their Casa Magna line.  The Casa Magnas have been a hit since they first came out.  They were named Cigar of the Year back in 2008.  A few years back they released the Casa Magnus Domus Maximus, which was a limited edition release.  After that, about five years ago,  they renamed it the D. Magnus in a non-limited release form using the same blend but with a wrapper from a different year.  The latest version of the Casa Magna is the D. Magnus II. The Quesadas are also going to put out three new sizes this year, but these will be limited.  Coming later this month will be the first new size, the Trajan.  It is a 5” x 60 in a D shape, think one quarter box pressed.  It will have the same blend as the regular D. Magnus line, but because of the shape, the filler ratios were adjusted to keep the flavor the same.  The Trajan will be joined by the Hadrian and the Marcus Aurelius. The trio will be  known as “The Three Good Emperors” because their reigns marked the apex of the Roman Empire.  Says Reilly:

The purpose of “The Three Good Emperors” series is to celebrate our 5th year producing the D. Magnus brand. It has been a huge hit for us and thanks to the cigar devotees of D. Magnus II and their support, we are able to introduce some new, unique sizes with even more affordable pricing. That’s quite a trick when you consider the difficulty of rolling such complex vitolas.

The other two will be released later in the spring.  The retail price for the Trajan will be $8.50.