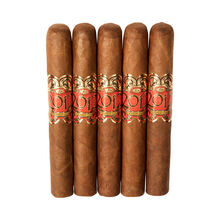 Oscar Valladares began his foray into manufacturing premium cigars, by releasing one of his first lines called 2012 which gave a nod to the Mayan calendar that predicted the world would end on Dec. 21st of that year. These Oscar Valladares Limited Edition Toro cigars, available in 5-packs, celebrates this gloomy occasion with five cigars from the original Corojo line, that was designated to be smoked before the world ended on that fateful day. Luckily, we’re all still here, and 2012 cigars turned out be a sign of great future smokes to come. Every cigar in this pack consists of a gorgeous clay -red Honduran Corojo wrapper embracing a carefully chosen blend of Honduran and Nicaraguan tobaccos. The result is a medium bodied smoke that displays rich tasting notes of pepper, cocoa, cashews, and creamy coffee. Enjoy one of the early blends from Oscar Valladares, and fortunately not the last, and order this savory Limited Edition 5 pack, while you still can!
Read more
6