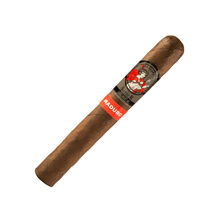 For the very first time, the famous La Gloria Cubana brand has crossed the border into Nicaragua to deliver their most powerful cigar to date. The new Serie R Black Maduro No. 58 is beast of a smoke boasting a blend of extra-dark dark Cuban-seed Nicaraguan binder and filler tobaccos, and unlike like its top rated maduro cousin, this one has an even darker licorice black,Double Maduro wrapper. Once lit, this formidable XXL stick blasts the palate with bold, yet refined flavors of black pepper, coffee, cedar, honey, and an assortment of various spices. Presented in boxes of 18, Serie R Black Maduro #58 is a must try for every La Gloria fan, and anyone else looking for a super-rich, super-strong, full body cigar.