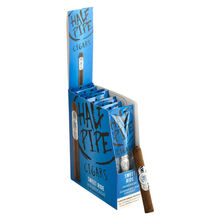 Available in affordable packs of 10, Half Pipe Sweet Ride cigars bridge the gap between cigar and pipe smoking with a with a delicious blend of black Cavendish pipe tobaccos rolled inside a sturdy binder and a stunning, top-quality Habano wrapper. The result is a mellow smoke with yummy flavors and aromas of toasted almonds, caramel, milk chocolate, and vanilla. With half Pipe Sweet Ride cigars, you can enjoy the best of both worlds sans the bulky briar pipe and tamper.