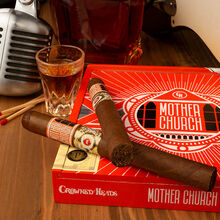 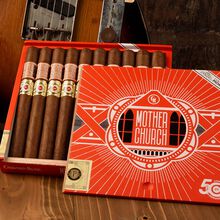 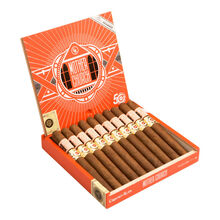 Crowned Heads Mother Church JR 50th Anniversary cigars pay homage to our milestone achievement of being your number one supplier of cigars, cigar accessories, and everything tobacco related for the last half century. And, if this top-notch 7 x 48 Churchill is a sign of things to come, our next 50 years will be just as great as our last! These elegant, flawlessly rolled cigars are named after Nashville’s legendary Ryman Auditorium called the “Mother Church of Country Music” that was home to the Grand Ole Opry from 1943 to 1974. The cigars are produced in limited small batch quantities at Crowned Heads Tabacalera Pichardo factory in Estelí Nicaragua with a core of deeply aged long filler tobaccos from Nicaragua covered by a tasty Connecticut Broadleaf binder and a gorgeous vintage Ecuadorian Corojo 99 wrapper. Boasting a rich medium to full bodied profile, and savory flavors of hickory, roasted nuts, cocoa, spices, and some natural tobacco sweetness, it’s safe to say that this country music inspired creation from Crowned Heads hits all the right notes! Crowned Heads Mother Church JR 50th Anniversary cigars were made in very limited quantities, so we highly suggest that you order a box of 10 today, so that you don’t miss out on this terrific once in a lifetime smoke.
Read more
7