Home › JR University - Everything Cigars: Guides, Tips Cigar Tips & How To Dos - Learn About Cigars › How to Cut a Cigar

How to Cut a Cigar

How to cut a cigar

There are three very common questions I get asked all the time by new cigar smokers:

As you can see, the first two questions have entire articles dedicated to guiding you through the process.  Today, however, we are going to focus not only on the proper technique to cut your cigar, but also on the various tools you can use.

Where do I cut a Cigar?

The head of a cigar usually comes in two distinct shapes; a standard rounded head or tapered figurados.

A rounded head is what you will see on a majority of cigars.  Rounded cigars have what’s called a cap, a little piece of wrapper tobacco that is placed on the head to encase it. 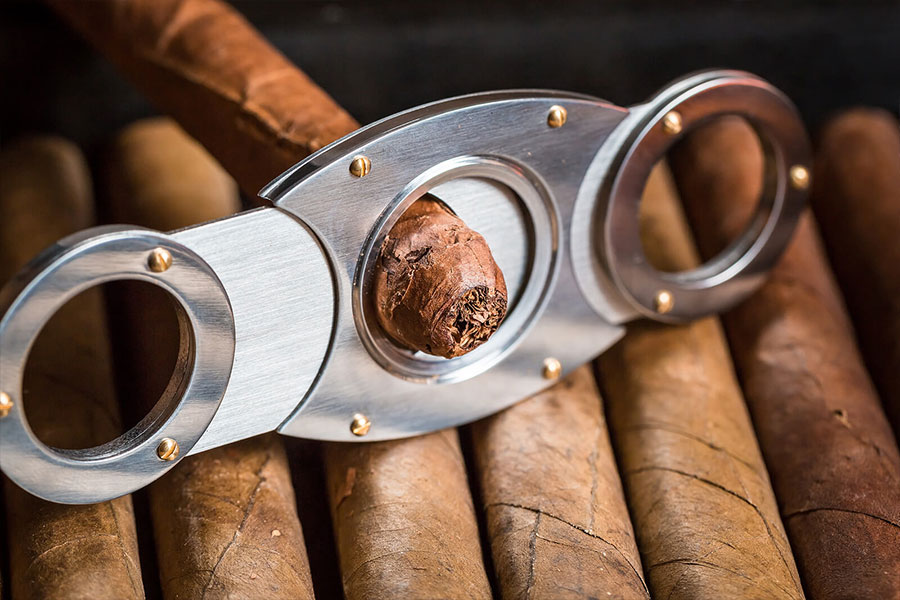 If you cut too shallow, you will have a minimal draw, and you won’t get into the crux of the cigar.  If you cut too deep, the flavor and experience will be altered tremendously.

The same goes for a figurado.  You are going to want to just cut about ¼ of an inch from the top.  This will get you the optimal smoking experience.  This may seem highly technical, but once you get the hang of it, it becomes very natural.

Next, we are going to look at different types of cigar cutters.

How to use a Guillotine Cutter

The guillotine cut takes the technology responsible for separating many a French nobleman (circa 1792) from his head and applies it to your cigar.

This is the standard cigar cutter.  It is highly effective at both rounded and figurado styles and with practice will offer the most consistent cut.

The one-blade is preferred if you want to spend less money; however, you may have an inferior cut because the single blade sometimes has an annoying habit of smushing (that’s the technical term) one side of your cigar head.

How to use a Double Blade Cigar Cutter

Many people face problems with their smoke as they cut a cigar too far down the cap. This results in a cigar that is constantly unravelling and difficult to keep together.

There are methods for cutting your cigar with a double blade cutter that prevents separation from your cigar and enhances your entire smoking experience.

A main factor to note is that you must inspect the shape of your cigar before cutting it. Any rounded cigar will have a cap which is a separate piece of tobacco that is hammered in. When analyzing your cigar, you will see a line separating the cap from the rest of the cigar.

One method is to take the cutter, place it above the line and cap then quickly snip it, and your cigar is ready to smoke.

Another method which may be easier for beginners is to place the cutter onto a flat surface, put the cigar upside down, do a quick snip and your cigar will be perfectly cut and ready to smoke!

How to use a V-Cutter

The V-cutter is used in a similar way to a guillotine, but with a more unique cut.  Instead of a flat straight blade, this cutter has a slight v-shaped curve to it.  The cutter places a V-shaped notch in your cigar tip when it makes the cut.

The v-cut also gives you a more centralized draw, which is preferred by many cigar smokers.  I will also use a v on a cigar with a lot of age, where the wrapper might be a bit more fragile.  I like to call this the connoisseurs cut.

How to use a cigar punch

A punch cut is quite different from both a guillotine and v-cut.  It is usually a small cylindrical device where the blade is circular instead of flat.  Think of almost a cookie dough cutter.  Unlike a cigar cutter, a cigar punch provides a small hole in the cap of a cigar.

To make a hole in a smoke, you need to insert the punch system into the cap and push down until a perfect hole is made.  You want to gently twist the punch back and forth as you insert it into the cigar to make sure you aren’t just mashing it into the head.

Once the hole is created, you can pull the plug of the hole out of the cap – depending on if the cutter has a retractable blade.

Cigar lovers often use punches for convenience, as doing so is quick and simple.  It is also recommended for larger ring gauge cigars that are almost too big for a traditional cutter.

How to use cigar scissors

Cigar Scissors are a tool that is much more for home use then for on the go.  While they have fallen slightly out of style, they remain a pretty popular tool for cutting a cigar.

Do not just use any scissors, cigar-cutting scissors are specifically manufactured for the purpose of snipping cigars only.  Forged from high-precision, surgical-quality stainless steel, a good pair will give you a nice, clean-cut every time

While they do make smaller ones for your pocket, I recommend buying a larger, more sturdy pair and keeping them at home rather than travel with them.  Think of them like a tabletop lighter or desktop humidor.  They are the high-end choice but not something you want to take around town. 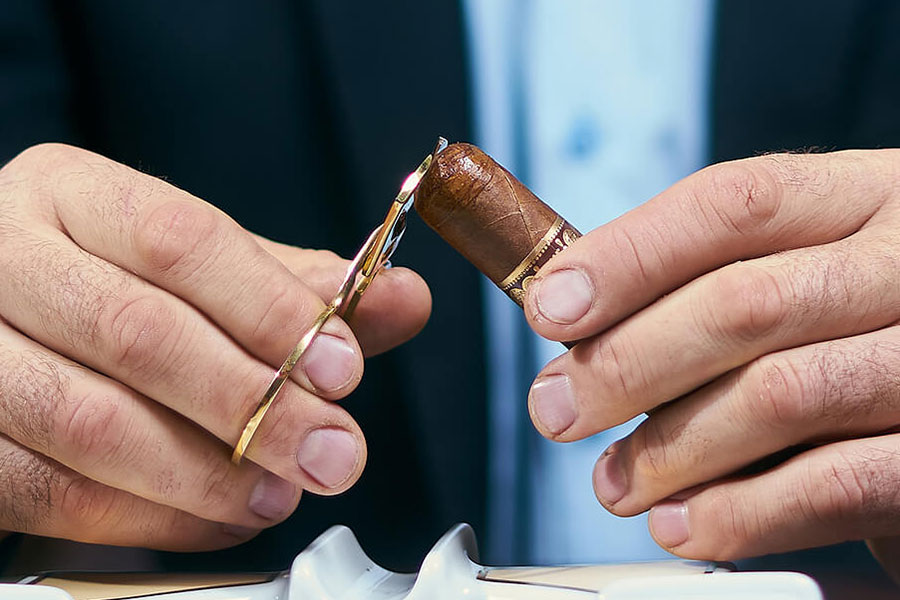 How to cut a cigar without a cutter

Although cutting a cigar with your chosen cigar cutter is the ideal method for cutting your cigar, if you don’t have that option at hand, there are other ways to get into a smoke:

As I said, these measures are only to be used when you don’t have your chosen cutter at hand. You can make sure you don’t go without, however, by checking out some of our premium cigar cutters.

If you’re looking for more accessories to help you with your love of all things cigar, then be sure to check out our extensive cigar accessories page.