When thinking of a great cigar pairing, one’s mind tends to go to whiskey or beer.  While I have written on these topics endless and am quite a bourbon and beer fan myself, I feel like one of the best pairing options is one that is often overlooked.  That is a solid cigar and wine pairing.

Not only is wine the most popular alcohol worldwide, behind beer, it also shares so many similarities with cigars.  It has common ground in the growing process, aging, fermentation, flavor profiles, and even industries. 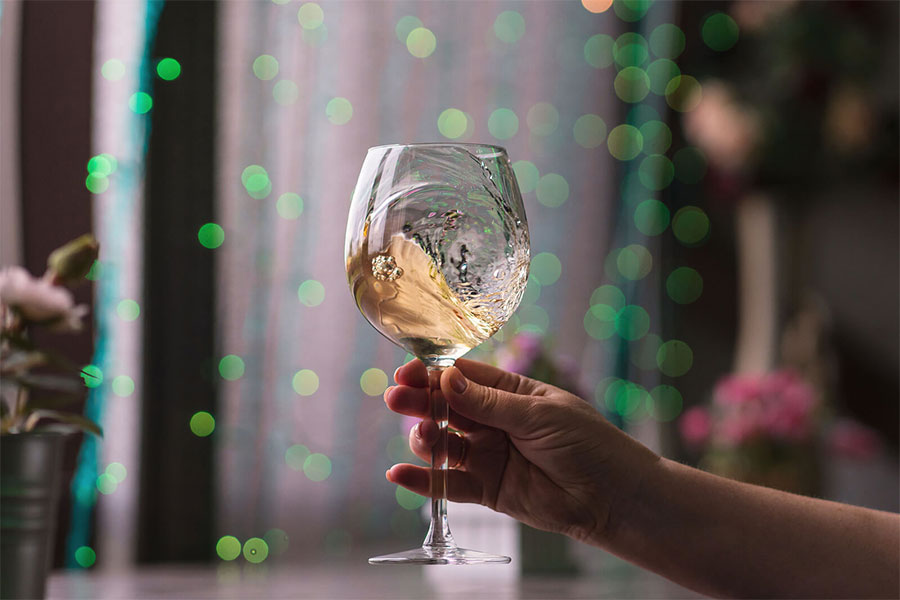 Think of another industry besides cigars that is renowned for certain vintages, has educated connoisseurs and storied history, and rich culture.  Cigars and wine go hand in hand and it’s about time we explored that.

So as the latest entry into our pairing series, we are going to take a look at some amazing and iconic wine varieties and which cigar and wine pairings would be perfect for you.

And of course, with all our top 5 videos there is a fantastic limited sampler that you can buy today.  But as always they are limited so don’t delay and get yours today. 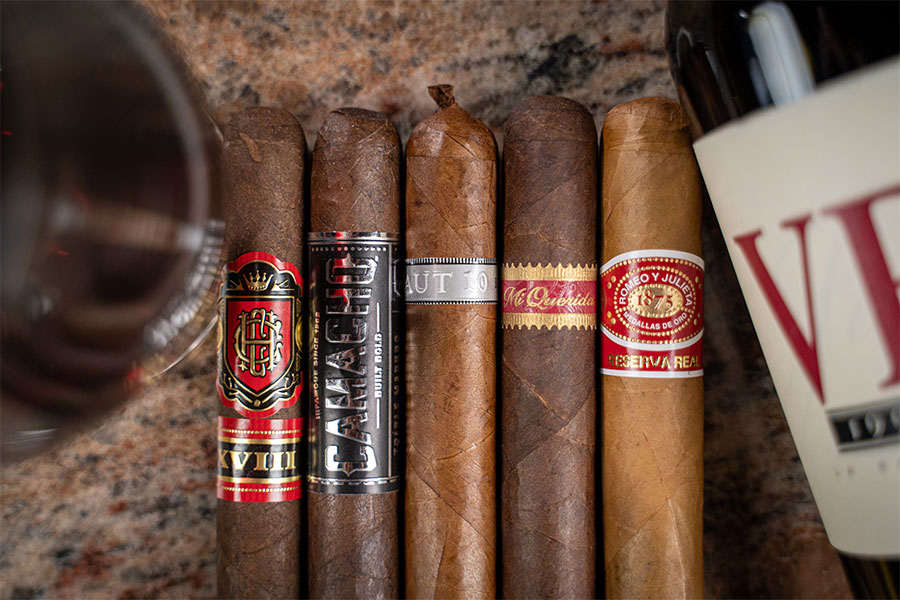 Zinfandel is a red wine based on a black-skinned grape, also known as Primitivo.  While there is a sweet rose variety known as White Zinfandel, today we are looking at the traditional red.  This grape originated in the Apulia region of Italy, down by the “heel of the boot”.  In the mid 19th century, the grape found its way to California where the modern-day Zinfandel was born.

While flavor profiles can depend on the growing region, much like cigars, there are several commonalities between all of them.  A robust red, Zinfandel often has a unique blend of flavors.  Rich, dark fruit notes are always prominent but are often followed by a dash of anise and pepper.  This gives off a rich, sweet, and slightly spicy profile.

For pairing with a cigar, you want to find the commonalities in flavor, aroma, and of course strength.  The Crowned Heads CHC Reserve XVIII is a perfect partner for this particular wine.  The San Andres wrapper offers up rich notes of chocolate and dark fruit, while the Ecuadorian binder and Nicaraguan filler give it hints of leather, earth, and a dash of spice.

I will be honest; I am not a huge white wine drinker.  I also feel that darker, more flavorful wines often pair better with cigars.  That being said, if a white wine is your jam, you still have great options for a solid cigar and wine pairings.  Let’s take a look at the immensely popular Chardonnay.

Chardonnay is a green-skinned variety of grape that was first grown in the famed Burgundy region of France.  Since then, it has spread around the world.  Today, popular varieties often hail from France, New Zealand, Australia, and of course California.  Chardonnay is also the base of most sparkling wines, including Champagne.

The wine is known for its smooth, light, and sweet taste.  Again, this depends on the region and manufacturer, but most Chardonnay wines have notes of apple, vanilla, butter, and have a smooth finish.

This makes them a great companion to a smooth, mellow creamy cigar. The Romeo Reserva Real has always been a fan favorite in the mellow cigar world.  It is reliable, smooth, flavorful, and consistent.

Its Ecuadorian Connecticut wrapper gives it notes of cedar, vanilla, cream, and a dash of sweetness.  Not only does it have similar flavor notes to the Chardonnay, but its mellow body and strength also won’t overpower the wine.

The most widely planted wine grape in the world is the delicious Cabernet Sauvignon.  It gained prominence as one of the main grapes used in the legendary French Bourdeaux wines and ever since has been grown all over the world from France to Chile, to Lebanon, and even South Africa.

It is the iconic red wine, especially for lovers of the French style.  It is rich and flavorful and its higher acidity and tannin count make it’s the perfect wine for aging. 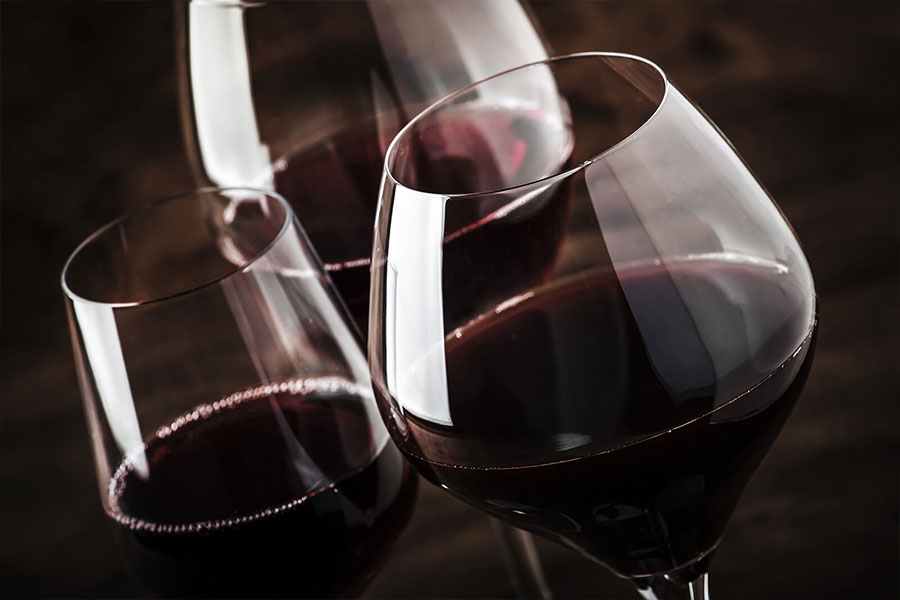 In fact, it has become known that aging Cabernet Sauvignon in oak softens it and brings out a wonderful wood and vanilla flavor.  It usually contains notes of dark cherries, plums, leather, tobacco, and a signature hint of black pepper.

For a cigar pairing, you again want to try and match up flavors and also not choose something too strong or too weak.  Otherwise, one profile will dominate the other.  I went with a Camacho Triple Maduro, with a little age on it.

The use of maduro tobaccos for the filler, binder, and wrapper gives it a rich and smokey tendency, with notes of sweet coffee, dark fruit, leather, and earth.  By aging it a bit, you are able to complement the age of the wine, and it creates a truly wonderful experience.

Oddly enough, the most famous Italian Red wine name is not actually a grape, but a region and a designation.  Chianti originates from the Chianti region of Tuscany.  While it used to be known for the big, basket laden bottles, today it is viewed as a high-end quality choice.

There are two major varieties that you might have heard of: Chianti and Chianti Classico.  Their difference lies in their blend and region.  For example, Chianti, which is the standard, has to use at least 70% Sangiovese grapes and no more than 10% white grapes.  Merlot and Cabernet Sauvignon are also allowed.

Chianti Classico is seen as the higher-end choice.  These grapes need to be grown at a higher elevation, and the makeup requirements are slightly different.  They need to use at least 80% Sangiovese and 20% of other red grapes.  In 2006, the use of white grapes in Chianti Classico was banned.

The result of these blends is a very flavorful, elegant drinking experience.  While most standard Chianti wines have notes of dark fruit and herbs, the higher end varieties often boast hints of espresso, sour cherries, and even a sweet tobacco flavor.

This makes them a great pairing partner for a rich and sweet broadleaf cigar.  Something along the lines of a Dunbarton Mi Querida Triqui Traca would be perfect.  The blend of sweet and rich notes with a smooth finish would go quite well with this Italian delicacy.

Petite Sirah was created by botanist Francois Durif in Montepellier, France in 1880. The grape is a cross between Syrah and the even more rare Peloursin. Some delicious flavors you’ll detect while enjoying a glass of the Sirah are blueberry, sugar plum, dark chocolate, black pepper, and black tea.

Being that the Sirah is a hearty, deep red wine, I found that having it alongside a Steak or Beef Stroganoff was the best way to compliment the wine other than the Haut 10.

With the Illusione Haut 10 being a Nicaraguan puro, cloaked with a Nicaraguan Corojo wrapper, the flavor notes will coincide perfectly with a glass of the Sirah. The fruitiness of the wine complemented with the oak, and the heartiness of the Haut 10, it will have your taste buds salivating for more delectable flavor notes!