Red, White, and Blue Cigars to Enjoy for the Fourth of July 2020

Red, White, and Blue Cigars to Enjoy for the Fourth of July 2020

July 4 is right around the corner, and Americans everywhere are incredibly excited to celebrate.  Good food, good friends, good fireworks, and of course, good cigars will help enhance your celebration of our countries birthday.

If you are looking to find the perfect cigar to pair with your July 4 beverage of choice, you can check out our wide variety of different pairing articles.

For this list, however, I chose to pick some cigars that simply represent those beautiful American colors: red, white, and blue.  Each of these cigars showcases one of these colors on their band.

On top of that, they are each fantastic cigars and some of my personal favorites.  So, without further ado, let’s take a look at some of the best red, white and blue cigars to enjoy for July 4. 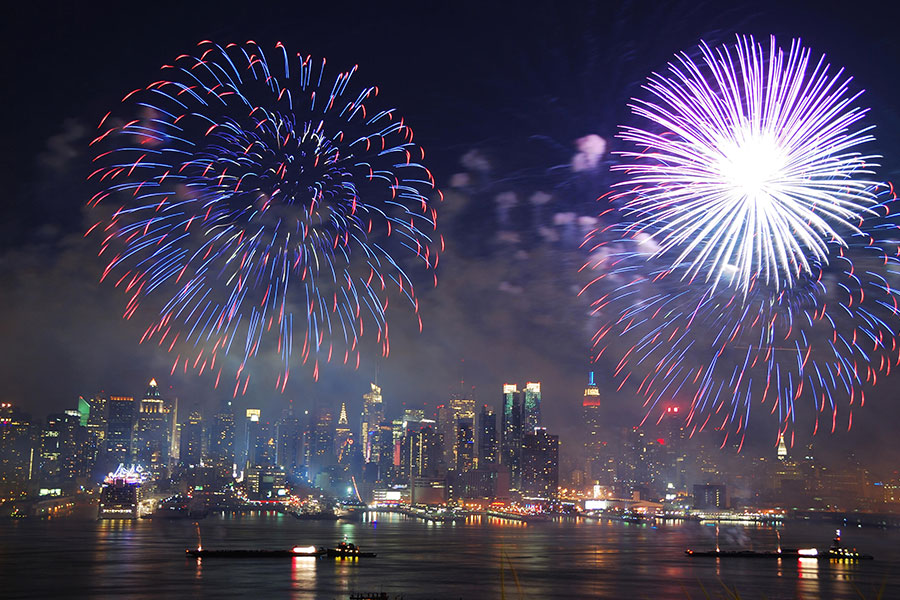 When I think of the color red, my mind immediately goes to the Joya Red.  I have always been a huge Joya de Nicaragua fan.  From the Original Antano, to the highly-rated Numero Uno, in my mind, Joya can do no wrong.

A few years ago, the company released what I call their “color series”.  Each cigar is named after a certain color, and the blend and flavors help represent that color in an artful and tasty way.

The Joya Red was always one of my favorites. It has gone on to be one of the brand’s bestselling products due to its flavor, construction, and an incredible price.

The Red is hand-rolled using tobaccos from the three main growing regions of Nicaragua, giving it a complex core.  The finishing touch is a zesty Nicaraguan Habano wrapper that adds in wonderful notes of pepper and leather.  Its bold, red band is great to smoke this  July 4.

A few years ago, Macanudo released its Inspirado line.  This line of cigars was meant to be different from the brand’s original line of classic, smooth cigars.   The Inspirado was a modern line, with more flavor and complexity then one would expect from those original Macanudos.

Similar to the Joya line, the Inspirado series are each named after a certain color, with their blend representing that color through its flavor profile.

The Inspirado Red was released to coincide with the company’s 50th Anniversary.  The color red was chosen to represent the zesty and spicy characteristics of the blend.

The cigar is hand-rolled using five-year-old Estelí tobacco and vintage tobaccos from the island of Ometepe, a volcanic island known for its intense and fiery tobaccos.  This full and zesty blend is a great addition to the Inspirado line and to your July 4 line up.

The Montecristo White Series is among the most popular and best-selling premium cigars in the industry.  It is known as the classic mellow bodied cigar, with a smooth creamy aroma and great flavor.

AUSA decided to add a line extension, this time using specially aged tobacco to bring you an even smoother experience.  It was from that idea that the Montecristo White Vintage was born.

While the original White Series uses an Ecuadorian Connecticut wrapper, the Vintage uses an actual, Connecticut shade-grown leaf.  This is a tad more flavorful, adding in great touches of creamy, coffee, vanilla, and a nice nutty overtone.

The aged tobacco makes for an exemplary cigar, and the fact the wrapper is grown right here in the US of A makes this even better for July 4.

While this cigar might take its name from another classic American holiday, its white band makes it great for July 4.  On top of that, its blend is perfect year-round.  Viaje is known for its wide array of limited, small-batch products.

In fact, I’d go as far as to say they are the most boutique company out there in terms of production numbers, style, and lines.  This Nicaraguan gem is another great entry to the brand’s Thanksgiving series and will add a touch of American history to your holiday.

The Left Over White meat is handcrafted at the legendary Aganorsa factory.  It utilizes the famed corojo and criollo tobaccos, giving it a sweet and enticing profile.  Notes of tobacco sweetness along with a dash of spice and oak, make this a well-rounded cigar with a great story behind it.

Regius is a drastically underrated cigar, and that is a damn shame.  While the company only has a few lines available in the US, I have been very impressed with each one that I have smoked.

Knowing that Regius has a line that is exclusive to the US, I thought the Exclusivos would make a solid entry in today’s list.  The company actually has a line that represents all three of the American colors (which are, of course, white and red), but I always preferred the USA Blue, so that’s the one I have chosen for today.

The Regius Exclusivo Blue was handcrafted by the Plasencia family at their massive facility in Nicaragua.  The cigar uses a blend of aged Nicaraguan tobaccos, along with a dark and rich Mexican San Andres wrapper.  This combination of tobaccos gives it a rich and sweet profile with a lot of flavor transitions and top-notch construction.

If you want to talk about a cigar pedigree, you have to talk about the Robaina family.  They have been growing cigar tobacco dating back to 1845 and have become legends in the Cuban cigar community.

When Hirochi Robaina decided to throw is straw hat into the American market, cigar aficionados around the country couldn’t wait to see what he was bringing.  They were not disappointed.

The H.R. Blue is an incredible cigar from top to bottom.  It is flawlessly crafted with Nicaraguan tobaccos for the filler and binder and an absolutely stunning Ecuadorian Habano wrapper.

The flavors combine effortlessly and create a profile that any cigar smoker would salivate for.  Its construction is one of the best I have ever seen and is a testament to over 100 years in the cigar industry.