The Beer and Cigar industry is very similar in more ways than one. From the specific plant that’s used to the climate of where the plant is grown, and even the specific fermentation process for both tobacco and barley. But at the end of the day, it’s all about achieving the best quality with each new product released year after year. A pilsner would pair perfectly with a milder cigar, while a stout would pair nicely with a full-bodied cigar.

The reason beer pairs so well with cigars is due to the fact that it is a carbonated drink. Beer cleanses the palate, allowing you to fully experience every flavor note within the cigar. With so many new, appetizing cigars out on the market, we’ve made a new cigar and beer pairing list for you to try as soon as possible! Here are the Top 5 Cigar and Beer Pairings of 2021.

Don’t forget to check out our limited-time sampler in the link below.

We can’t get enough of the NightShade by Drew Estate. Not only because it’s a JR exclusive, but because it is a near-flawless cigar. From the construction, to how it burns, to the delicious flavor notes throughout, the NightShade is one of Drew Estate’s best cigars to come out in the last five years. Expertly rolled at the company’s La Gran Fabrica Drew Estate factory in Nicaragua, the NightShade displays a dark Connecticut Habano wrapper that cloaks an Indonesian binder and fillers from the Dominican Republic and Nicaragua.

Pairing an Imperial Stout and the NightShade by Drew Estate almost seems too good to be true, yet it’s a pairing that you’ll never live without once you try it out!

Our next pairing is one that looks absolutely delicious at first glance. We have the Davidoff Grand Cru Series Toro pairing alongside a refreshing Blonde Ale. With spring in full swing and the summer being a hop, skip, and a jump away, this pairing is one you should try to enjoy outside with some good friends while the sun is shining. The Davidoff Grand Cru Series in the Toro size is cloaked in a stunning Ecuadorian Connecticut wrapper while having tobaccos from the Dominican Republic to make up the binder and filler.

The main reason we chose to pair the Davidoff Grand Cru Series and a Blonde Ale was how light and refreshing they both are. Sometimes you want a nice little treat in the afternoon and the Grand Cru Series Toro with a Blonde Ale is just that! Flavor notes you’ll detect while smoking this medium-bodied beauty are nuts, wood, sweet caramel, and spice. The sweet maltiness, caramel, and hops overflow your palate once you take one swig of your favorite blonde ale beer.

The rich gold color of the Davidoff Grand Cru Series and Blonde Ale is a sophisticated choice in the beer and cigar pairing world and will look perfect in each one of your hands this summer while you’re relaxing poolside.

The Tatuaje Havana VI Verocu is from the hands and minds of long-time collaborators Pete Johnson of Tatuaje and Jose “Pepin” Garcia. This limited edition, Nicaraguan puro was made at the My Father factory in Nicaragua under the careful supervision of Pepin Garcia. With the Tatuaje Havana VI Verocu No. 3 being so limited and rare, we paired it with a beer that isn’t usually a “go-to” beer for the average beer consumer; a Milk Stout.

A mixture of chocolate and malt-sweetness is some of the flavors notes you’ll detect while enjoying a Milk Stout alongside the impeccable Tatuaje Havana VI Verocu from Pete Johnson and Jose “Pepin” Garcia. This combination is highly recommended from yours truly!

Released in early 2021, the Trinidad Espiritu Series No. 2 was the sequel to the delicious Trinidad Espiritu that released in later 2019. Both Espiritu No. 1 and No. 2 are themed, showing love and paying homage to some of the best times and growing regions to exist in the cigar business. For Espiritu No. 2, Altadis USA pays homage to the beautiful country of Brazil by donning the colors of the flag on the box and cigar band, as well as having the famous “Christ the Redeemer” statue on the box.

The 6 x 54 Espiritu Series No. 2 Toro has tobaccos from Brazil and Nicaragua to make up the wrapper, binder, and filler. This medium to full-bodied gorgeous-looking stick has flavor notes of earth, black pepper, dark roast coffee, and cinnamon on the backend. That’s why we at JR decided that a Doppelbock would be the perfect beer to pair alongside the Trinidad Espiritu Series No. 2.

The aroma of a Doppelbock will fill your nostrils with chocolate and dried fruit, much like the Espiritu No. 2. However, once you take a sip of this delicious dark beer, you’ll taste additional flavors of toast, wood, and char. Making the Doppelbock and the Trinidad Espiritu Series No. 2 a cigar and beer pairing you cannot go without all summer.

The Warped Flor del Valle was manufactured at the renowned Casa Fernandez factory in Miami, FL. The Warped Flor del Valle Sky Flower Lancero is a Nicaraguan puro that is cloaked in a stunning Nicaraguan Corojo ’99 wrapper. This medium to full-bodied smoke produced rich flavor notes of white pepper, earth, raisins, coffee, and sweet cream. With enjoying the Lancero size, I was able to have two Citra IPA’s alongside this smoke, which only made my smoking experience better with each puff and sip.

Flavor notes you may detect while drinking a Citra IPA are lemon rind, tropical fruits, soft pine resin and a touch of honey bound. Much like the Warped Flor del Valle, the Citra IPA is medium bodied, yet nice and smooth.

This pairing was one of my favorites out of all the pairings listed for the simple fact that it was very relaxing and the Citra IPA complimented the Warped Flor del Valle perfectly throughout the entire time smoking this scrumptious smoke from Kyle Gellis.

When most publications discuss cigar pairings, it is usually followed by the words whiskey, wine, or brandy.  With the rich history of diverse varieties of these libations, they are always seen as the traditional pairing partner to a fine cigar.

For the better part of the past century, most beers served in the US were almost one dimensional, making them problematic for pairing with cigars that have a variety of flavor profiles and characteristics.

The past two decades, however, have seen a renaissance of sorts in the beer industry.  Craft breweries have popped up all over the country and they are constantly creating new and unique beer varieties.  It is because of this, that beer and cigar pairings have become a much more popular practice.

For this article, we are going to go over some of the more popular styles of beer and discuss how to get the best cigar and beer pairings for your palate. 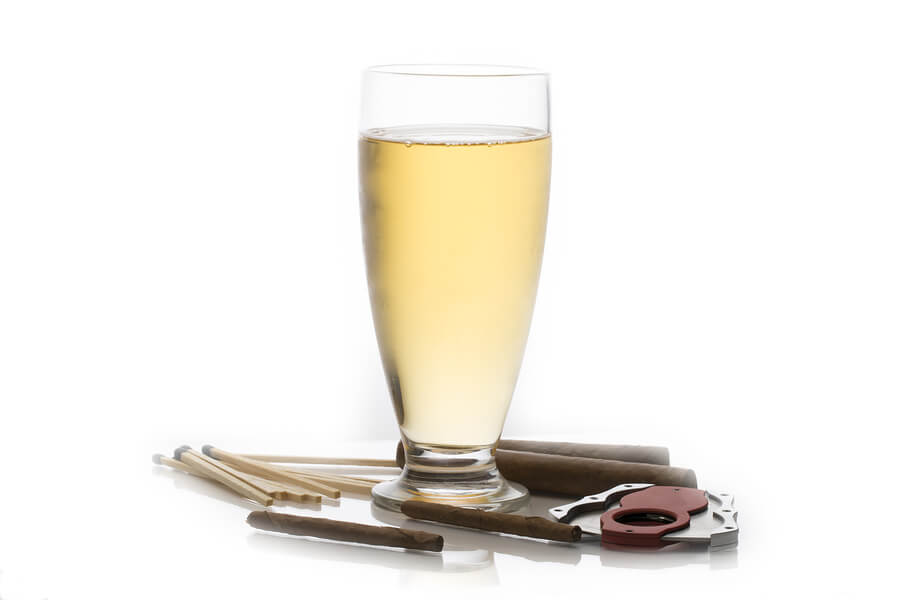 There are two major classifications of beer, which generally full under the umbrella of either an ale or a lager.  Ales, which date back to ancient times, are fermented at a warm temperate for a short period, while lagers use a cold fermentation process and are fermented for much longer.

In the modern era, there is also a classification known as specialty beers.  They are usually brewed to a classic style but with modern techniques and flavors.  These include beers such as porters or Weizenbier. 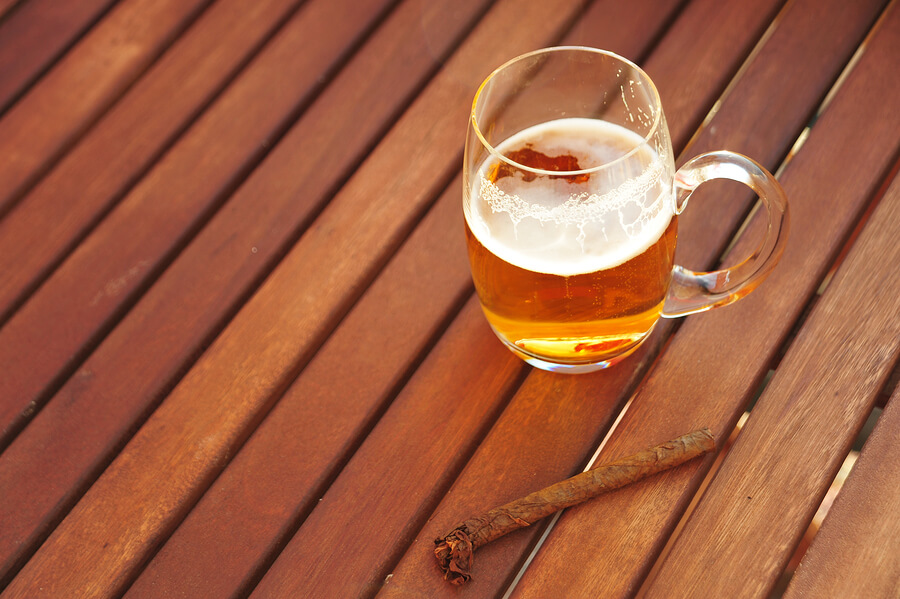 Ales tend to be the heavier and richer class of beer.  The way in which ale is fermented, using top-fermenting use and higher temperatures, makes for a much fruiter, spicier, and richer flavor than most lagers.  Most of the strong or intense beers you’ve tried are most likely an ale.

Some styles you might be familiar with include IPAs (also known as Indian Pale Ales), brown ales, stouts, and porters.  For something common, such as an IPA, you want a nice medium-bodied cigar with a good amount of spice, but nothing overwhelming.  The Crowned Heads Four Kicks would pair very nicely with this style of ale.

With such a vast classification, it makes sense that not all ales are created equal and different cigars will pair with different ales.  Stouts and porters, for example, are dark, rich, and creamy.  This beer styles lend themselves to pairing with a rich and dark Maduro cigar.

Something like the Arturo Fuente 8-5-8 Maduro would be a great match for a dark porter or stout. Sour beers, which are also classified as ales, have become incredibly popular in recent times.  You might think that due to the sour and fruity flavor, it might be impossible to pair them with a cigar.

That is certainly not the case. Cigars such as the Flor de Valle from Warped or the Espinosa Laranja Reserva have tremendous floral and citrus notes, making them ideal companions for sour beers. 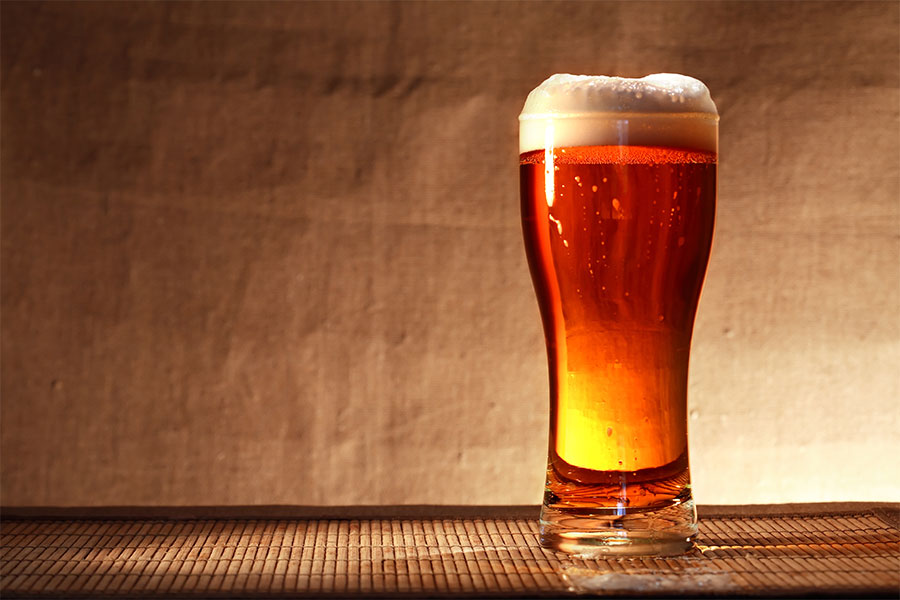 While fancy and flavorful ales tend to dominate the modern craft beer scene, it is the light lager style that is still the best selling.  That is because the most common, American style beers are all derived from a lager.  They are fermented cold and have a much more mellow profile and a crisp, clean finish.

Some popular examples of lagers include pilsner, bocks, and Marzen style beers.  If you ever had a Budweiser or Coors, then you have a lager, as these are considered American Style Pale lagers.  In terms of a pairing, you want something smooth and creamy for a traditional pale lager, such as a Montecristo White Series.

However, there are a few styles of lager that are heavier and more flavorful than others. Germany’s famous Oktoberfest style of beer is, in fact, a lager.  For an Oktoberfest pairing, well you want the Quesada Oktoberfest cigar.  I don’t think there is a more suitable pairing in the industry. 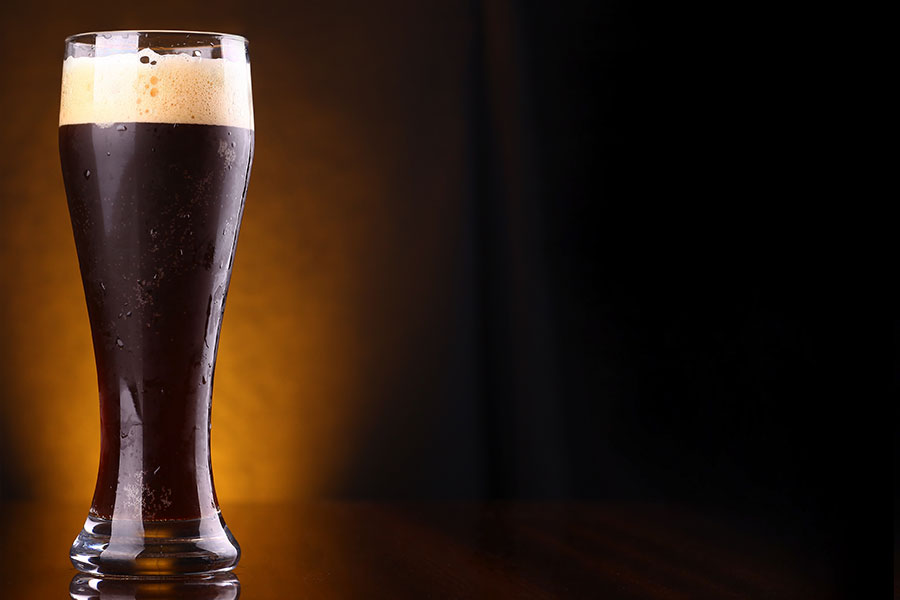 As always, when it comes to my pairing recommendations, these are just my opinion.  The best way to find your favorite beer and cigar pairing is to experiment.  Try several different cigars with different beers and discover what really connects with you.

These guidelines are just a simple first step in seeing what would most likely go well together.  If you have a beer and cigar pairing suggestions, yourself, leave us a comment below.