JR has requested that I write an unbiased review of the new Uncharted premium handmade cigar. However, this cannot be an unbiased review because I work here, and if I say it stinks, I’ll lose my job and be forced into an early retirement.  Then I will have to spend the rest of my waning years playing shuffleboard with other old farts at a senior village in Boca Raton—because that’s where all of us Jews go to die! Please keep reading anyway, though, because I actually really do love this cigar… Honest!

AJ Fernandez, raised in Cuba, now produces some of the finest smokes in the world in his factory in Esteli, Nicaragua. A third generation cigar master, AJ incorporates old world quality in every stick. Just mentioning his name could make the average cigar enthusiast sing his praise, (or uncontrollably dance the Mambo) so we were thrilled that he created a cigar just for us. 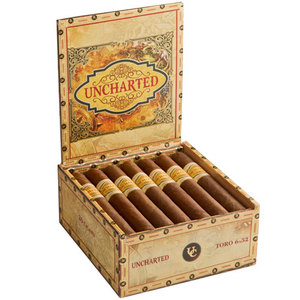 Uncharted Cigars is an all maduro blend with a thick and spicy San Andrés binder, and a unique combination of 75% Nicaraguan and 25% Jamastran filler from Honduras. Covering these rare top-quality leaves is a dark and spicy Ligera Habano Ecuador wrapper, glimmering with oil.

Uncharted is available in four popular sizes that accommodate those who love the bigger ring gauges. Not one to miss out on a great smoke, and having some dirt on one of the guys in purchasing, I was able to smoke all four as soon as they came out. For this review, I revisited The Uncharted Toro, a 6 x 52 gem.

To ready my palate for this fine smoke, I feasted on a hot pastrami sandwich, a bag of Jalapeño Doritos, and washed it all down with three Ring Dings and a 32 oz. bottle of Mountain Dew. Four hours later, and ten pounds lighter, I was out of the crapper and ready to light her up!

Check ‘Em Out
Dipping my shnozzola into a freshly opened box, my senses were roused with the slightly musty yet sweet, earthy smell of perfectly aged tobacco. Aesthetically, this Toro was a beauty: it was solidly rolled, and the Ligera Habano Ecuador wrapper was smooth with almost no noticeable veins. As an added bonus, the band gives the smoke a look of understated elegance.

Light Her Up!
Honestly, I knew what to expect having smoked many before, but I was excited nonetheless. As is customary with just about every AJ Fernandez blend, the first few puffs were loaded with some ass-kicking peppery notes that almost singed my nose hairs. Once the cigar had my attention, a symphony of delectable flavors that include cocoa, sweet chocolate and nutmeg took center stage and remained consistent.

The Sweet Spot
Not only is the complexity ramping up during this second-third, but I’m noticing the burn is even and incredibly slow. The aroma is filling the room with almost the same irresistible sweetness found in the best Cuban cigars, and those coffee and spice flavors are taking turns coming to the forefront without overpowering each other. Fancy words for “this stick is a flavor hound”!

The Home Stretch
This puppy is burning so slow that I could have easily enjoyed the rest reading a copy of “War and Peace”! Unfortunately, my reading is limited to Facebook posts about what my friends are eating for lunch, so I just cracked a few beers. At this point, the Uncharted Toro is actually building more complexity as notes of leather and charred wood join the fray.

Last Puffs
It’s not too often that a cigar holds its flavor right down to the thumbnail, but this sucker sure did. In fact a roach clip would have come in handy, but I never owned one. I only smoked pot 1,652 times and I never inhaled. Right down to the nub, all the flavors mentioned were still going strong. As a final tease, a creamy caramel finish made this cigar almost impossible to retire.

Final Thoughts From The Peanut Gallery
Not to rub it in, but the whole gang at JR can smoke any cigar they want, and this one is sticking out of more kissers than I can actually count. It’s that good! Order a box today and taste for yourself how AJ Fernandez and JR hit it outta’ the park with our very own Uncharted Cigars.