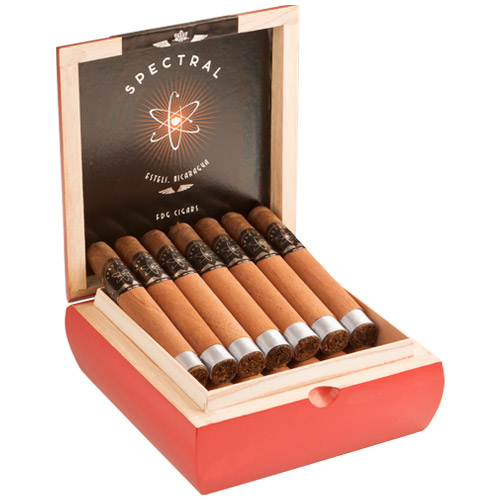 Ok not really a ghost, but Spectral is a phantom-like figure…kinda like a ghost.  It also is a new-old cigar for sale from Flor de Gonzalez.  The company has been making cigars since the Boom but has generations of tobacco experience going back to Cuba growing the leaf in the fields of Las Villas in Santa Clara, Cuba.  About 13 years ago, Yadi Gonzalez took over from her father working on the brands.  The company has made some terrific cigars like the 90 miles (which signifies the distance between Key West and Havana and the watery gap that Yadi crossed as a child in a rickety boat with many other refugees). There is also the top rated 90 miles 1980 edition (signifying the year Yadi made it to America). In addition to making their own cigars, sometimes the company made smokes for others.  One such company requested a big order but then went out of business.  The cigars were made, but ended up in Yadi’s storage.  It took several years to get them free and now they are on the market.  Yadi has called them Spectral.  The original cigars had old tobacco to begin with—an Ecuadoran Habano wrapper over a Nicaraguan binder and Nicaraguan and Peruvian fillers and were delicious.  They have been resting for the past 5 years as Yadi got final custody of them.  She says once she figured out that she would be able to sell them, she ordered more from her factory in Nicaragua and while they don’t have the extra five years of aging on them she says the latest batch of sticks are aging and are even better! Spectral comes in three sizes: Atom at 5.5” x 44, Cation at 5” x 50 and Proton at 6” x 50. And they are affordable.