Just outside of Orlando, Florida lies a town most of us have never heard of. That town is Clermont. In Clermont, Florida you can find a 20-acre portion of land that is home to the Florida Sun Grown farm. The FSG farm produces some of the most sought-after and delectable tobaccos this industry has ever seen.

A mixture of constant sunshine, fertile soil, and perfect air circulation on the farm are just some of the reasons manufacturers love using FSG tobaccos in their cigars. One company that has utilized FSG tobaccos to perfection is Drew Estate. In 2011, they began production on the limited-edition Florida Sun Grown that eventually hit the market in 2016.

So, for our latest cigar review, we go over the FSG 20 Acre Farm from Drew Estate. We were able to take some time away from ourbusy lives and enjoy the 6 x 52 toro, one of three popular sizes that come in the 20-acre farm. Here are our thoughts on this scrumptious cigar from Drew Estate!

Smoke Time: Between 70 and 90 minutes depending on the size

For this smoking session, I decided to use a punch cutter for this, as well as light up the cigar with a match. Before I lit it up, I did my go-to cold draw test as I do with all my cigars.

While puffing on the unlit smoke, I got an abundance of oak and spice, specifically red pepper. The oaky taste overpowered the spice, which was a lot to take in at first.

Once I lit this smoke, my hopes were that theoak would dissipate a little, so I could detect and enjoy the other notes the 20-acre farm would provide.

Once lit and fifteen minutes into this smoke, all I tasted was oak. Even though this was what I expected, I was still hoping for more.

After the first five minutes of smoking the FSG 20 Acre Farm, the notes of red pepper I detected in the cold draw test disappeared. I really loved that combo and was hoping for more of it. I remained optimistic that the red pepper notes would reappear in the second or final third.

I’m about forty-five minutes in and heavily into the second third. The oak flavor note has taken a backseat to some notes I find extremely rewarding. A mixture of earth and a touch of citrus filled my palate with joy.

I attribute the citrus zest flavor note to the sun-grown tobaccos from the sunshine state. Maybe there’s a little on the nose as well. With all the nutrients the FSG tobaccos gain from the rich soil, it would make sense that’s where the zest note derives from.

As I entered the final third all the flavors came back into play, making a perfect balance with one another. As I hoped, the red pepper flakes made their way back, pairing with the citrus note exquisitely.

The oaky and earth notes played so well off one another, and it was an experience I’ve never had while smoking a cigar with a Connecticut shade wrapper. Besides the FSG tobaccos, I must give some of the credit to the Honduran Habano binder tobaccos for producing the oak and earthiness combination I ended up loving so much. 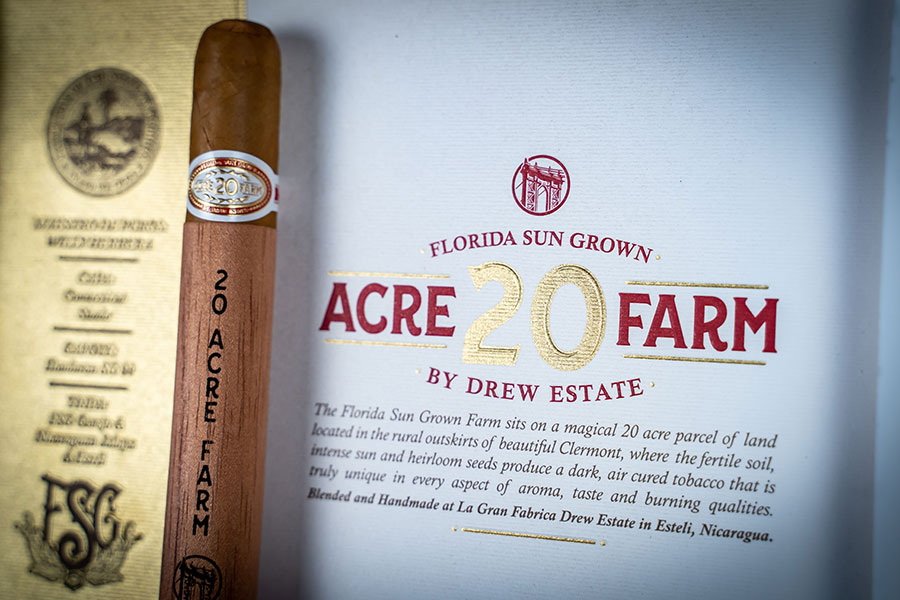 At first, I was going to pair a nice scotch or whiskey with the FAG 20-acre farm smoke. However, I felt like the oak notes from both the cigar and whiskey would be too much. So, I went with my trusty cup of coffee to pair alongside this smoke.

However, after I used my punch cut on the stogie, I dipped the tip of the cigar in my coffee to see if it added additional notes to the smoke. I didn’t notice a difference or a change in notes, but I may continue to try this trend that I’ve seen numerous times on various cigar-related Instagram accounts.

For a cigar from a prestigious company such as Drew Estate, the cost is extremely affordable. I always tend to gravitate towards buying cigars if they come in a count of 20 cigars or more because you’re investing in a specific brand that gives you a lot of smokes to enjoy. If there’s an affordable box of 10 out there, I’ll get it.

Check out the video review below to see what our very own Nick Libretti has to say about this magnificent smoke!

Enjoy and until next time!